So you’ve decided to buy an inflatable boat to start getting into the watersport hobby; the next step is learning how to find the right inflatable kayak for you.

If you’re buying an inflatable kayak for the first time, the number of options can be overwhelming. It’s surprisingly easy to buy the most affordable kayak and regret it after you’ve used it a couple of times because it’s not comfortable or fast enough for you.

In this article, we’ll discuss everything you need to consider before buying an inflatable kayak and ensure you get the right one for you. Let’s dive right in. 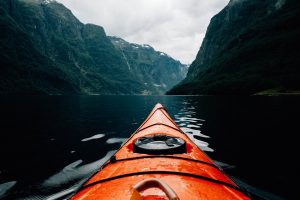 How to Choose the Right Inflatable Kayak

Let’s go over some of these factors:

There are tons of inflatable boat options so the price can also vary drastically. In our experience, you get what you pay for when it comes to inflatable kayaks.

Nevertheless, it’s also understandable that you don’t want to spend thousands of dollars to get a good quality inflatable kayak. Commonly, there are three price ranges of an inflatable kayak:

When talking about how to choose an inflatable kayak, the more inexpensive products may not have plenty of features or the best quality, but they can last several years to provide your money’s worth.

Another important thing you’ll need to consider is the safety of your inflatable kayak. Generally speaking, inflatable kayaks are pretty safe as long as you use them with consideration. However, taking a $200 inflatable kayak to a whitewater river is not going to end well.

When it comes to inflatable boats, the more you spend, the better kayak you’ll get. But most inflatable kayaks available today have a certain degree of puncture-resistant and durability measures.

If you want to get the most safety value for your money, choosing PVC-based inflatable boats is probably the best route to take.

PVC is the most widely used material for an inflatable kayak since it is massively produced and costs less. PVC material can also handle a lot of stress from the air pressure inside the boat and prevent external damages that can cause the boat to leak.

There are various design styles of inflatable kayaks which provide another variable that can confuse first-time buyers.

Each design style has its perks and drawbacks, so before you go to Amazon and start buying random inflatable kayaks, let’s go over some of them first:

Sit-on-top kayaks: These boats are designed with the top-side open, making it easier for you to get in and out of them. But, you’ll also get more splashes of water into the boat. Sit-on-top kayaks are more comfortable to use in warmer climates or during hot summer.

Sit-inside kayak: This type of inflatable kayak style has an enclosed cockpit where you can sit inside and keep water from coming into the boat. Sit-inside kayaks are great to use when you’re exploring rivers or lakes that have cold water temperatures. 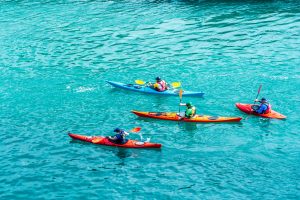 The size and carrying capacity should also be one of your main considerations when choosing the best inflatable kayak. Depending on your body height, weight, and gears, you might need a larger or smaller boat with a relative carrying capacity.

Larger inflatable kayaks typically have more carrying capacity, but some compact models can carry enough for a single paddler. A typical 10-foot kayak can hold about 300-400 pounds of the load depending on the brand and make.

If you’re planning to get into the water with a partner or two, various models with multiple inflatable seats will make your paddling experience more comfortable and enjoyable. For more information on what size of kayak is perfect for your weight, look into Paddle Camp to help you find out.

Based on the type of water activities you would like to experience, there are some other features you should look for in an inflatable kayak. If you’re planning to go fishing, picking a boat with several rod holders and strap-in nets to carry your gear is beneficial. If all you want to do is go on leisure paddling, a pair of oar holders and a skeg should be enough.

You should always pick an inflatable boat that comes with everything you need to get on the water. These includes oars/paddles, a pump, a carrying bag, and preferably a repair kit. Some inflatable kayak models also come with inflatable seats that can make your paddling trips pleasant and fun.

Aside from those, several smaller kayak features might not be as necessary to your paddling experience, but can still benefit you nonetheless. These features include having a high-output air pump, quick inflation/deflation valves, puncture-resistant coating, removable skegs, etc. 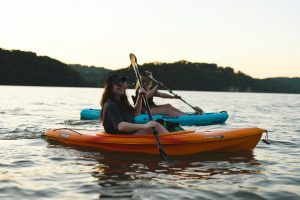 Choosing an inflatable kayak is a simple, yet tricky task. Every factor of an inflatable kayak, including price, style, size, and overall quality could determine how well your paddling experience will be. We hope that this article has helped you get more information on how to choose the right inflatable kayak for you and your needs. 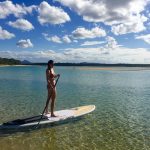 Our passion is water sports and having fun. Our team independently review the best inflatable water sports products so you can make the right choice and get out on the water sooner!

Learn more about us and how we review the latest inflatable products here.

How to Fold Your Inflatable SUP with Fins

From Budget to Premium — How Much are Inflatable Paddle Boards?

InflatableSportsGuide.com is a participant in the Amazon Services LLC Associates Program, an affiliate advertising program designed to provide a means for sites to earn advertising fees by advertising and linking to Amazon.com. Additionally, this site participates in various other affiliate programs, and i sometimes get a commission through purchases made through my links. I do not specifically market to children under 13.